In the entry hallway of the Proctor house stands a beautiful wood tea cart which, before it was gifted to us, belonged to former OCC First Lady Gail Boatman. The cart’s hospitable nature, beautiful simplicity, and sturdy construction matched her own, and at Mrs. Boatman’s passing today at the age of 108, I am prompted to give thanks to God for her.

Thankful for Her Hospitable Nature

When former OCC president Don Earl Boatman was just nineteen, his family moved to California, and, searching for a church home, they walked one Sunday morning into the San Bernardino Church of Christ. “I saw Gail singing in the choir,” remembered Don Earl with a smile, “and I thought, ‘This would be a good church to attend!’” Gail was eighteen, and three years later, they were married.

Don Earl could not have chosen a better ministry partner.

Over the next years, the Boatmans ministered in Oregon, Oklahoma, California, Indiana, and Minnesota, and in each place, Gail opened their home to friends, fellow leaders, traveling missionary families, and others in need.

In 1952, when Don became president of Ozark Bible College, Gail’s hospitality made the fledgling, under-resourced college seem like a welcoming place. She invited students to their home, and when new faculty families moved to Joplin on small Bible college salaries, they often lived with the Boatmans—sometimes up to six months—until they could find a house:

Former Ozark professor Bob Stacy said, “They opened their home to us, and we were treated as if we were their own family.” That warm, family atmosphere pervaded the whole college, shaping Ozark’s culture to this day. A tea cart, of course, is a little table on wheels to take food and drinks to guests; it’s made for hospitality.

So was Gail Boatman, and we give God thanks.

Thankful for Her Beautiful Simplicity

As a young couple ministering in Oklahoma, Don Earl was paid $12 a week. So they rented a one-room apartment for $10 a month, and they slept in a screened porch. Gail apportioned their money in budget envelopes, and they ate leftovers from the church’s Sunday fellowship dinners. “We lived high on the hog,” she said. “We were happy.”

They moved to Joplin on Labor Day weekend 1952—“the hottest summer they had had in thirty years,” remembered Gail. When they arrived, the President’s house had no electricity, but Gail made the best of it.

In those early years, college finances were often tight, and the Boatmans sometimes went without a paycheck. Their daughter Dona remembers the joy when a gift to the college allowed them to be paid. Lynn Gardner noted that, even when college finances were healthier, Don Earl “insisted that the gap between his salary and that of a first-year teacher be kept small.” Gail was always willing to live without extras, sacrificing because she believed in the college’s mission.

That contented, sacrificial spirit was contagious, and thus the college grew. Gail Boatman was beautifully simple, and we give God thanks.

Thankful for Her Sturdy Construction

Her tea cart may not be fancy, but it is solid. I don’t know how old it is, but it’s lasted—still sturdy—for a long time.

So did Gail Boatman. 108 years old! Physically, she was remarkable. She survived a brush with death as a young bride. She fell ill their first year of marriage with a 105 temperature. A urologist diagnosed nephritis, an infection in both kidneys, and wanted to remove a kidney. Gail wouldn’t let him.

In 1935, nephritis was considered fatal, and because they had no insurance, Gail was never admitted to the hospital—no IVs, no antibiotics. “I didn’t know much that was going on for two months,” said Gail. “I just lay there in a daze.” Doctors eventually tried a new treatment, injecting her kidneys several times with Arjural. “It was a black old thing that kills germs. Doctors today say that if nephritis had not killed me, the Arjural should have.”

But by God’s grace and her own hardy constitution, she survived…and thrived. Her birthday was March 4th, which she once reminded me was a command: “March forth!” And march she did. Gail was a don’t-just-sit-there-do-something kind of lady, energy brimming out of her. At age 100, her daily routine was: wake at 7 a.m., weigh herself, begin walking—or trotting, as her niece Linda Boles described it—up and down the hallways of Spring River Christian Village. Even though she was legally blind!

She wasn’t just physically sturdy—her spiritual vitality was strong to the end. In 1943, Don Earl preached at a Disciples of Christ church with some members who held liberal theological views. The ladies’ group wanted Mrs. Boatman to lead a discussion on a book denying Christ’s deity, but the young preacher’s wife refused.

Those firm convictions never softened. When Gail was 103, Katie and I took our kids Christmas caroling at Spring River. When we entered Mrs. Boatman’s room, she welcomed us warmly, standing ramrod straight the whole time, and though she couldn’t see clearly, her mind was clear as a bell. She handed us a devotion on Christian courage she had just typed…and then shared it verbally with us, preaching to my family in her room as powerfully as Don Earl ever did from a pulpit! Her sturdy biblical convictions still remain at this school she and Don Earl served for 27 years.

I have known four of the five First Ladies in Ozark’s 80-year history, and as a man who is thankful for my own wife, I can say these women gave as much as their husbands to further this mission of training kingdom leaders. Because of Gail Boatman, thousands of gospel workers marched forth into the harvest field, and many more thousands of lives were changed because of it.

So today, on the day of her passing, we give God thanks. 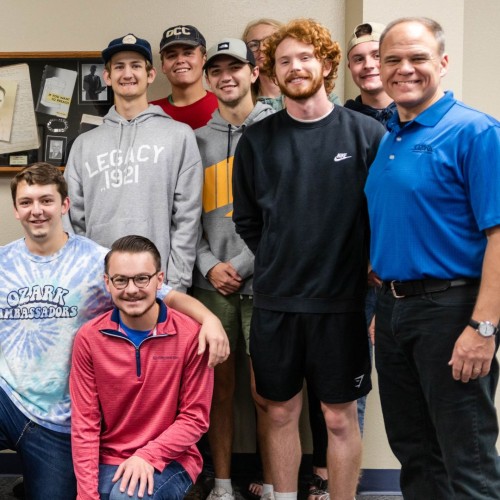