I’ll call this story, “How a Helicopter Hat Shapes Kingdom Leaders,” and before the story begins, here’s where it ends: I’ll ask for your help in covering more kingdom leaders’ heads.

I soon learned Williamson=the “wild guys” dorm, and my floor “Willy 3rd” was the wildest. (As a Willy 3rd guy, a current megachurch preacher once accidentally set the dorm on fire—firetrucks came to put it out.) Though I’m boring, I laughed at my floormates’ antics and, in my later college years, considered myself a missionary to this wild tribe. Fast forward: my three sons are now all proud Willy 3rd guys.

So what about the helicopter hat? This past March, when I visited my 20-year-old son Carl on Willy 3rd, I spotted on the hallway wall a big poster with a rainbow-colored propeller hat hanging next to it. The poster was rules for a secret semester-long Willy 3rd game of tag! I took a picture, and here, with my commentary in italics, is what the poster said:

RULES
0. Don’t talk about TAG. (Clearly, I am now violating the first rule.)
1. Regular tag rules apply.
1.1 Remember you MUST say “you’re it” when you tag (& they must hear you).
2. No tagbacks.
3. No punching of the butt. (I was proud of them for this bit of maturity. Maybe my missionary efforts years before had lingering effects.)
4. No lying about being “IT” (*Schools*). (I guessed this was a reference to my son’s squirrely friend Caleb Schools, who must’ve tried to be too tricky.)
5. The game is played on odd-numbered days between the hours of 7 a.m. and 10 p.m.
5.1 The game is not played on the LORD’s Day EVER. (More maturity! I was impressed.)
6. There are NO safe zones.
6.1 There actually is one safe zone.
6.2 It’s the Willy Table DURING meals. (They like to sit together in the cafeteria.)
6.3 There is actually another one.
6.4 It’s the Willy section DURING chapel. (They also like to sit together in chapel. Previous Willy 3rd generations would totally have played tag during chapel, so...respect to Gen Z.)
7. If you end a game day as “IT,” you must wear…THE HAT...the next day. (The helicopter hat!)
8. Only Williamson 3rd residents have eligibility.
8.1 You must sign to play. (The bottom of the poster was covered in signatures.)
9. No drugs or alcohol allowed. (These are never allowed at Ozark, but I’m glad they reiterated it.)
9.1 Looking at you, Austin. (College kid humor. Austin doesn’t really use drugs or alcohol. Though I’m glad they’re practicing the courage to call each other out.)
10. Amendments must get majority vote in the GC (group chat) to become Rules. (Wow, they’ve developed their own little system of government.)
11. Have fun and don’t be a little b*y. (I’m trusting “little b*y” meant “little baby” or “little boy.”)

AMENDMENTS (Look, their legislative process must’ve worked!)
1. You MUST be sitting @ the Willy Table to be safe.
2. You are safe if you are peeing. (Again: wouldn’t have been true of past Willy 3rd generations. Progress!)

As I stood in the hallway reading the rules, I laughed out loud and thought, “What a bunch of yahoos! This is creative, hilarious, and a little encouraging.” I’m getting to the part where I need your help, but let me tell you what happened next…

Standing there, I glanced at the signatures when…surprise: I saw my name! Someone had signed me up without asking. (I suspect my son Carl.) I laughed again, went home, and promptly forgot about it.

The following Tuesday, I walked into the cafeteria to greet our Tuesday Tour prospective students. As I shook hands with one of our student recruiters—6’6” Zach Totaro—he leaned down and whispered, “You’re it.” My eyes widened—they got me! I knew the rules: No tagbacks. If I didn’t tag someone else by 10 p.m., I’d be wearing THE HAT the next day. (Could that be a good thing? Keep reading…)

I devised a plan. Leaving campus at 5 p.m., I stopped by the gym. Guys were shooting baskets before a pickup game, and I walked up to a Willy 3rd resident. Disguised in my suit as a friendly Bible college president, I stuck out my hand. “Hey, you’re Drew Dyer, right?” Drew said, “Yes, I am,” took my hand, and I leaned in. “And now you’re it, Drew.” I left, smugly satisfied. I headed home, safe for the night, having played the game and prevailed.

I am an early riser, so I go to bed early. That evening, I got in bed at 9:45 p.m. and was just falling asleep when 6’2” Carl burst through my bedroom door. He slapped my foot, yelled, “You’re it, old man!” and bounded out. My watch said 9:59 p.m. They got me again—with no time left on the game clock! 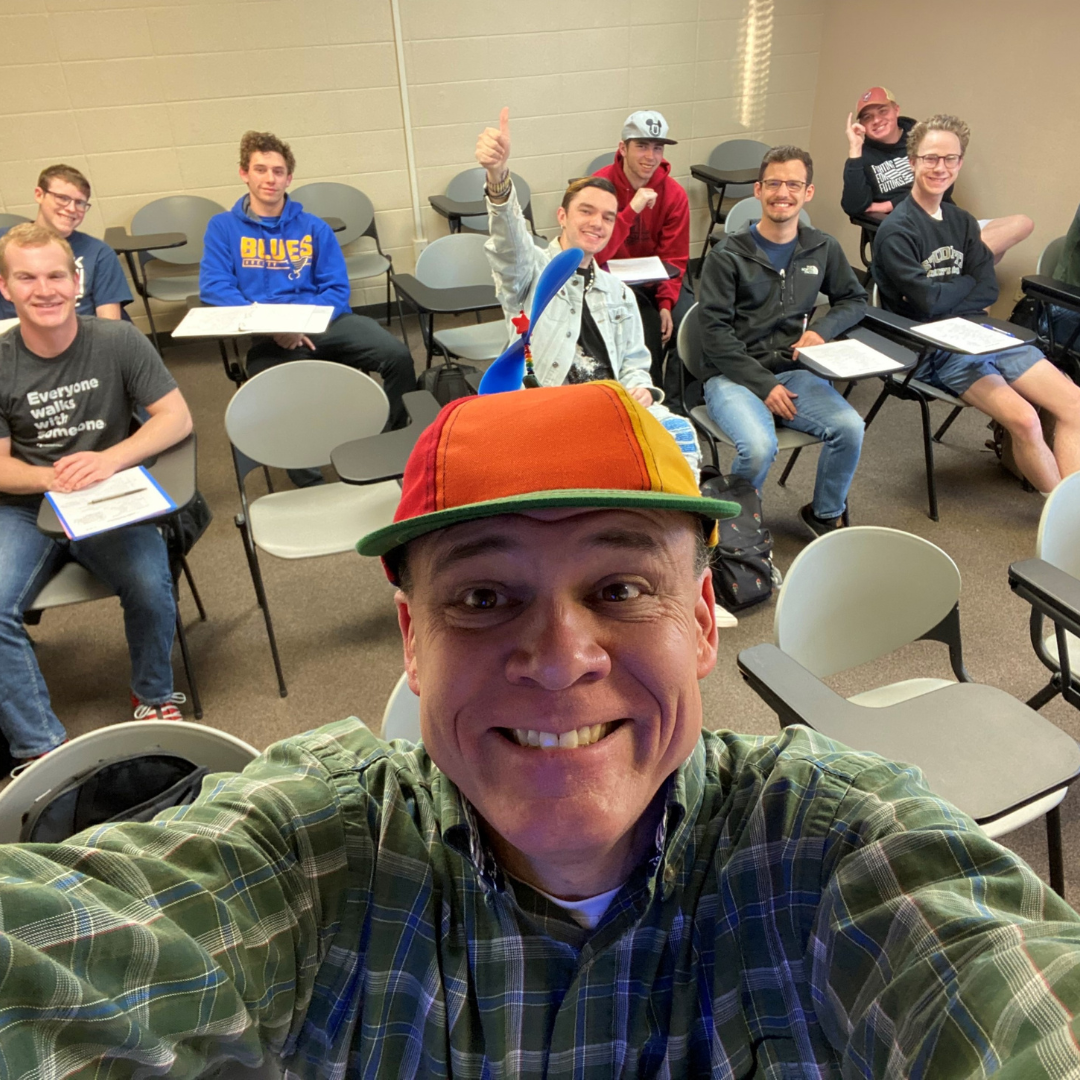 So...here’s a picture of me teaching my 8 a.m. preaching class the next morning in THE HAT. The Williamson guys loved that I played along, and I loved getting a little taste of dorm life again.

For me, dorm life was transformative. My first year, Willy 3rd upperclassmen included me in basketball games, Taco Bell runs, nightchasing the Joplin Spooklight, and boombox-blasting a new group called DC Talk. Those shared activities built strong relationships, so when those guys later spoke words of encouragement or advice or correction, I listened. I left the dorm a better kingdom leader because of it.

And that’s how a helicopter hat shapes kingdom leaders: spiritual growth happens best in community, and shared activities create that shared life. A Willy table in the cafeteria, a Willy section in chapel, and even Willy tag with a funny hat create relational bonds God uses to mature his servants.

That’s why I need your help. Right before summer, Williamson’s lobby roof developed a significant leak, resulting in extensive water damage. So this summer, we are replacing the lobby roof, some trusses, fascia, paint, and some lobby and patio furniture. The project cost is $45,000. It’s a roof, not a hat, but would you help cover these kingdom leaders’ heads?

This fall, two of those young men in Williamson will be my sons. Carl and Conrad will keep the “Willy=wild boys” reputation alive, but in the midst of the mayhem, the Master will be molding them. It really is a transformative place, so would you consider a generous gift to repair the Williamson roof?

Thank you for your partnership in training men and women for Christian service. As I look around the nation (and globe), I see former Willy guys now preaching, planting churches, discipling teens, leading worship, reaching unreached people groups, and even one leading a Bible college wearing a goofy hat.

That’s all because of partners like you. Thank you again for considering a gift to repair Willy. We’ll let you know if we make our $45,000 goal. (Anything above goes toward other campus maintenance.) Until then, may God bless your summer with laughter, joy, and maybe a game of tag.

P.S. If you’re a former Willy guy, come back to campus sometime to see the new roof. But fair warning: I might sign your name on the poster. The hat is waiting. 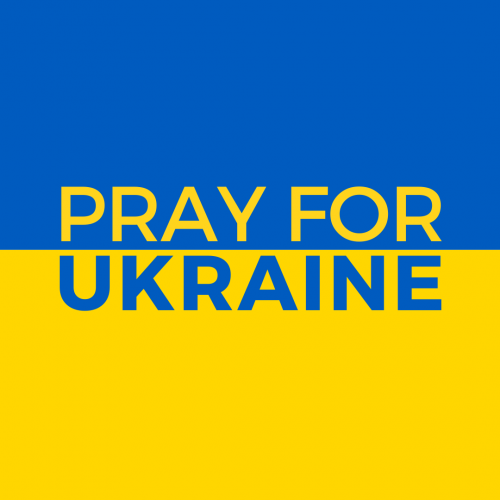 A Prayer for Ukraine